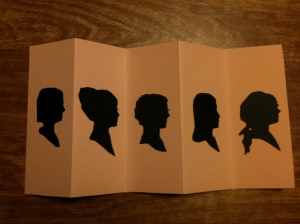 It was really important to me that my bridesmaids were able to get in touch with each other.

I mean how else will they plan the bachelorette party! LOL. Just (sorta) kidding! We aren’t exactly a big group of friends that hang out all the time. Some of them know each other, others don’t know each other at all. They are a fantastic bunch that I have met all throughout my lifetime and I wanted them to feel comfortable the day of the wedding.

So how would I introduce them to each other? I asked some of them to be bridesmaids through my own “Will You Be My Bridesmaid” cards, and I had a really fun time making them. I thought it might be a really great excuse to do another paper craft.

Initially I played around with making an accordion booklet with their names, phone numbers and email addresses. It worked well but it wasn’t very exciting.

Then I remembered a card featured on Martha Stewart that was of a woman in silhouette.

Aha! I had an idea: I would make a silhouette of each lady! Like her very own cameo! Then I would put the contact info on the back and fold it in an accordion style so you would just see the beautiful silhouettes from the front. And when they would turn them over…viola…functional info!

My first step was going to A.C. Moore and getting the right paper. I had a very specific vision. It needed to be in my wedding colors. Cameo light pinky peach and a dusty deep rose! With reddish-pink and black calligraphy (just like I saw in Betsy Johnson’s journal)! This step was the easiest. The second not so much! 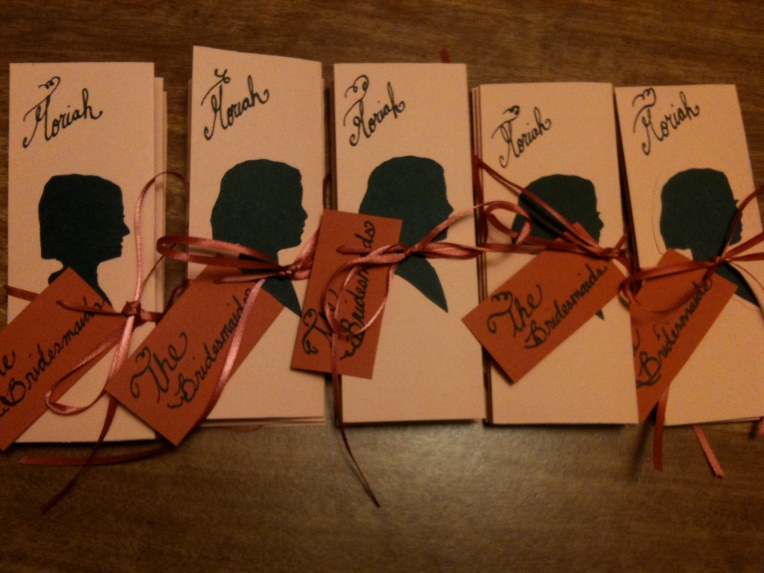 And the third step was really the most time consuming! I decided to make each lady different–with their silhouette based on their features. I thought this would be easy enough because I would just draw one out and stack the paper on top of each other. So it would be just like I had to do one for each girl.

Oh how wrong I was! The black paper I had was very bad quality. You can’t do multiple without the paper tearing. With 5 girls per card this equaled 25 individually created silhouettes. Ouch!!

The last part was the funnest but required the most attention to detail. I used rubber cement to glue the silhouettes to the paper and used calligraphy markers to write down the names and contact info of the ladies. What if I did all this then wrote down the wrong name, misspelled an email address, got a wrong? All my hard work would be out the window–I couldn’t erase it! And let me tell you…it happened. I put one name twice! But I got through it, and it was totally worth it. I love how they turned out. 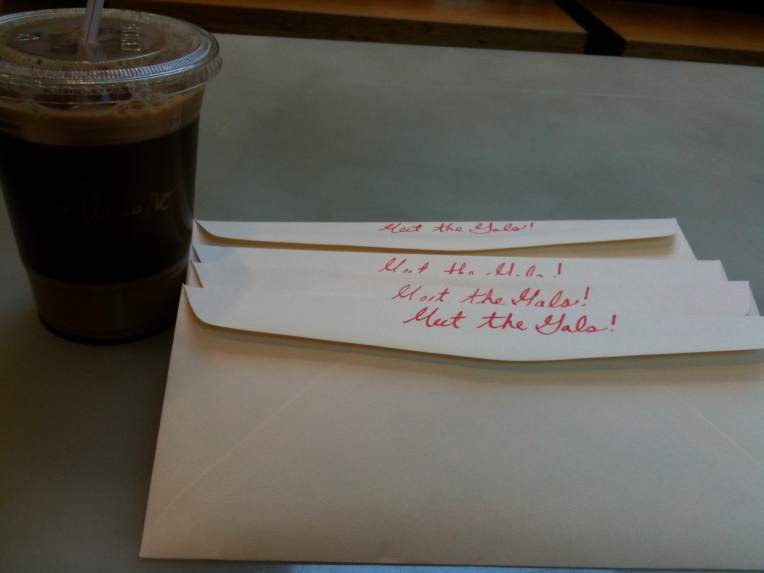 These are the most adorable “Will You Be My Bridesmaid?” Cards. I recently completed my very own paper project (more on that later) and these served as one of my sources of inspiration. So I thought I would share them with you! They are just too fun ‘n sweet to keep to myself. By the way, Once Wed has recently been putting out a lot of posts with step-by-step instructions on how to do some wonderful things. I love personalized things. And crafts projects! Try them out or make something your own!

I planned to send each bridesmaid a cute “Will You Be My Bridesmaid Card”. However, my grandmother got critically ill in May and I forgot my “plan” while out to dinner with my bridesmaid visiting from Chicago. At Rosa Mexicana, a hip NYC restaurant we went to because as Southern California girls we always miss Mexican food, I asked her in a stumbling manner if she would be my bridesmaid. When we got back from dinner the two of us were talking about wedding stuff and even my fiance was like, “You asked her already?” surprised that I didn’t stick with my plan. Well as a best friend and former roommate, she understood. But a few months later I got back on board with what I was planning, organized my thoughts and translated them into little mementos.

Here are a few pictures of how my other two “Will You Be My Bridesmaid” cards turned out: